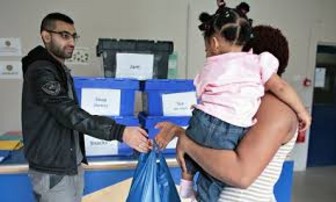 credit: Martin Godwin for the Guardian

Ali Jawad, a 22-year-old business student and volunteer at a Muslim food bank in London, sees people picking up packaged goods to feed themselves for the next week.

Food banks in the UK are overwhelmingly manned by Christian church-affiliated groups. Yet the food bank called Sufra, meaning "come to the table" in Arabic, is one of a growing number of Muslim organizations also seeking to address food poverty. Sufra and parent charity Al-Mizan (which offers grants of up to £500 to individuals in crisis across UK) give support to anyone in need, regardless of religion or ethnic background.

Programs that provide access to free or low-cost food products by distributing groceries and providing meals.

Programs which seek to alleviate and prevent hunger. Includes domestic and international programs.

Programs that provide instruction and services to the followers of Islam, the religious faith and cultural system that is based on the belief of Allah as the sole deity, in Muhammad as the prophet of Allah and in the Koran as the revelation of Allah to Muhammad and the divinely authorized basis for the religious, social, civil, commercial, military and legal regulations of the Islamic world. Audio Productions - Islam; Electronic Media - Islam; Film - Islam; Islamic Schools; Islamic Spiritual Retreat Programs; Koran Study; Magazines - Islam; Mohammedanism; Moslem; Mosques; Muslim Programs; Newspapers - Islam; Pilgrimages - Islam; Qu'ran Study; Religious Media - Islam; Religious Retreats and Camps - Islam; Television - Islam; Video - Islam; Worship Services - Islam

Stacy Zoernâs electric-car startup Kenguru is starting to revolutionize mobility for millions of wheelchair users. Her Kenguru hatchback enables users access the vehicle using its rear-opening tailgate and automatic ramp, securing their wheelchairs via interlocking device. It has no seats.