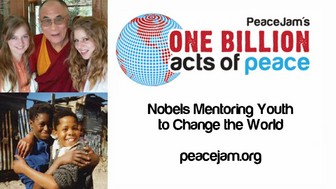 PeaceJam Foundation, a U.S. based nonprofit and global leader in developing young activists and civic engagement, has launched its five-year One Billion Acts of Peace campaign at the Social Innovation Summit at the United Nations in New York.

The campaign, led by thirteen Nobel Peace Laureates, including the Dalai Lama and Archbishop Desmond Tutu, is geared to inspire global citizens to work side-by-side to create one billion high quality projects that confront the most pressing social, environmental and political issues.