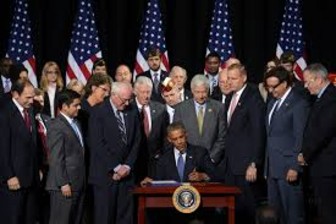 President Barack Obama has recently signed a $16.3 billion bill in an effort to renew the troubled Veterans Affairs Department. The President claimed that the country had a "sacred duty" to protect its military service members.

The bill was approved by Congress. It would enable veterans to explore private care options outside VA facilities. The bill would also provide financial assistance for the VA to employ more healthcare professionals.